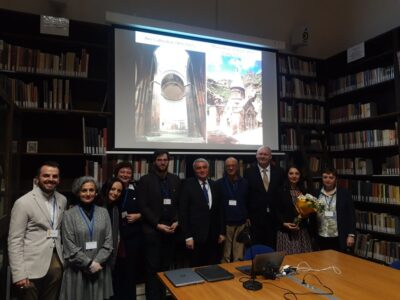 On February 20-22, the 3-day conference on “Re-Constructing Late Antique Armenia (2nd–8th Centuries CE): Historiography, Material Culture, Immaterial Heritage” was held at the Center for Early Medieval Studies within the Faculty of Arts of the Masaryk University in Brno. The conference was launched by a key-note lecture on “The Golden Age of Armenian Architecture in the 7th Century- Culmination of a Late Antique Legacy?”, delivered by the Key-note speaker, prominent Armenologist, Professor Patrick Donabedian from Marseilles.

The event was opened by Professor Ivan Foletti, Head of the Center for Early Medieval Studies, Dean of the Faculty of Arts Milan Pol and Ambassador of Armenia to the Czech Republic Ashot Hovakimian. Ivan Foletti addressed the audience online, presenting the initiative in general and wishing the conference fruitful work. In his speech Ambassador Ashot Hovakimian thanked the organizers of the conference, especially emphasizing the significance of the event in the context of the dangers threatening the Armenian historical and cultural monuments, resulting from the latest developments in the region. T

he Dean of the Faculty of Arts welcomed the event, valuing that the Center not only studies but also presents Armenian culture and expressing satisfaction with the Center’s effective cooperation with a wide range of international partners. Тhe valuable presentations were made by the Armenian Art historians Lilit Mikayelyan and Zaruhi Hakobyan from the Yerevan State University, Nazeni Gharibyan from the Matenadaran Institute, Gevorg Kazaryan from the National and Kapodistrian University of Athens (online), the experts from the Masaryk University, the University of Ca’ Foscari in Venice, independent researchers.The conference was organized as part of the project Cultural Interactions in the Medieval Sub-Caucasian Region: Historiographical and Art-Historical Perspectives (Czech Science Foundation – Swiss National Science Foundation); in collaboration between the Department of Art History, University of Fribourg and the Center for Early Medieval Studies, Department of Art History, Masaryk University, Brno. The event was held under the honorary patronage of the Ambassador of the Republic of Armenia to the Czech Republic Ashot Hovakimian.