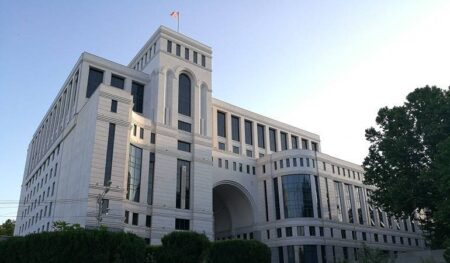 The Ministry of Foreign Affairs draws the attention of international partners and all progressive humanity to the fact that for more than three weeks Azerbaijan has been keeping Nagorno-Karabakh under the blockade, grossly violating the Lachin Corridor the regime set by the Trilateral Statement of November 9, 2020, and blocking the lifeline connecting Nagorno Karabakh to Armenia and the rest of the world. It is already the 23rd day that in front of the whole world Azerbaijan is forcing the population of Nagorno-Karabakh to deportation, pursuing its policy of ethnic cleansing.

The humanitarian crisis in Nagorno-Karabakh is worsening day by day. The lack of essential goods, food and medicine becomes more and more noticeable. The danger of malnutrition is tangible. Hundreds of families remain separated, being on different sides of the Azerbaijani blockade. 120,000 people became de facto prisoners.

Azerbaijani claims that the Lachin Corridor is open are absolutely groundless, which is proven at least by the fact that only the vehicles of the International Committee of the Red Cross are allowed to transport a limited number of patients to the Republic of Armenia in case of a life-threatening situation.

Under these circumstances, we highlight the importance of the urgent meeting of the UN Security Council held on December 20, 2022, which was convened in response to the request of the Armenian side, aimed at discussing the blockade of the Lachin Corridor and its humanitarian consequences for the population of Nagorno Karabakh. We highly appreciate the publicly expressed and clear calls by the vast majority of the Security Council members to end the blockade of the corridor by Azerbaijan and provide access to Nagorno Karabakh for international organisations. We also welcome the efforts of France during the ten-day period following the aforementioned meeting of the Security Council aimed at adopting the press statement of the President of the Security Council regarding the situation.

Armenia will continue taking targeted steps in all possible formats, including within the framework of the UN Security Council and international and regional structures, to ensure a resolute response and actions in accordance with the mandate and functions of these structures, for ending the blockade of the Lachin Corridor and the resulting humanitarian crisis which 120,000 people of Nagorno Karabakh are currently facing.

Azerbaijan should immediately reopen the Lachin Corridor in line with the principles set in Point 6 of the Trilateral Statement of November 9, 2020, according to which Azerbaijan guarantees the safe movement of citizens, vehicles and cargo through the Lachin Corridor, and the Lachin Corridor is under the control of the peacekeeping contingent of the Russian Federation deployed in Nagorno-Karabakh. Since the provisions of the Trilateral Statement have been violated as a result of Azerbaijan’s illegal actions, we also expect Russia to make clear efforts to eliminate this flagrant violation without any preconditions.