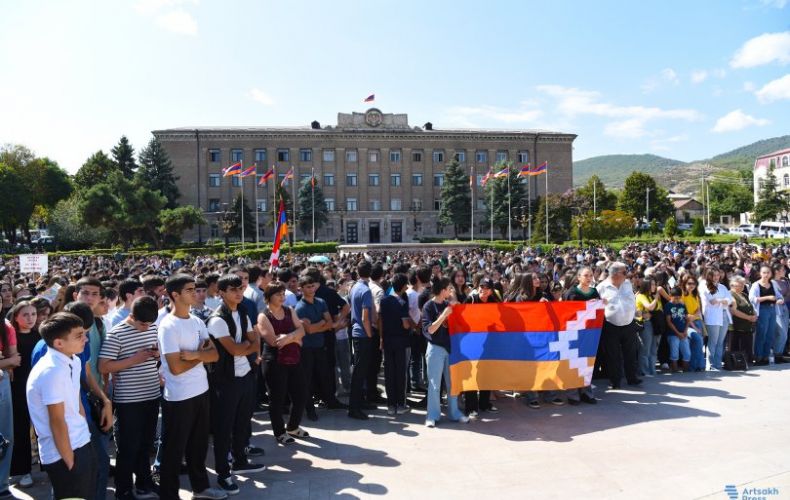 We,the residents of the Republic of Nagorno-Karabakh,the participants of the nationwide rally taking place on Renaissance Square,in the capital of Nagorno Karabakh,the city of Stepanakert,declare:

We will defend the sovereignty and statehood of the NKR.31 years ago we declared independence and exercised our right to self-determination ,in full compliance with the INF Treaty,with the exception of the USSR.These decisions are fixed by the “Declaration of Independence of the NKR” and the results of the nationwide referendum.Azerbaijan continues to carry out the genocide of the Armenian people,started over a hundred years ago by Turkey.The genocidal policy towards the Armenians of Karabakh was carried out by Azerbaijan both during the years of Soviet power and all subsequent years after the collapse of the USSR.It continues today,as evidenced,for example,by the events of recent days,when there was an armed invasion of the territory of the Republic of Armenia,accompained by crimes against humanity-mockery of the bodies of those killed,decapitation of prisoners of the war and other Armenian-hating inhuman manifestations.Without hiding its intentions to destroy the Armenians and the Armenian statehood,Azerbaijan is carrying out the Armenian genocide,involving other regional and international forces in its criminal actions.

Only the people of Nagorno-Karabakh have the right to decide their own destiny.Armenia throughout the years after the collapse of the USSR was guarantor of the security of the NKR and carried out mediatory functions in the negotiations on the settlement of the conflict between Azerbaijan and Nagorno-Karabakh.But the leadership of Armenia does not have the the right to sign any document providing for changing the existing status of the NKR.Any document of this kind is not legitimate and has no legal force.

Recognize the independence of the NKR-do not become complicit in the Armenian genocide carried out by Azerbaijan and its allies!