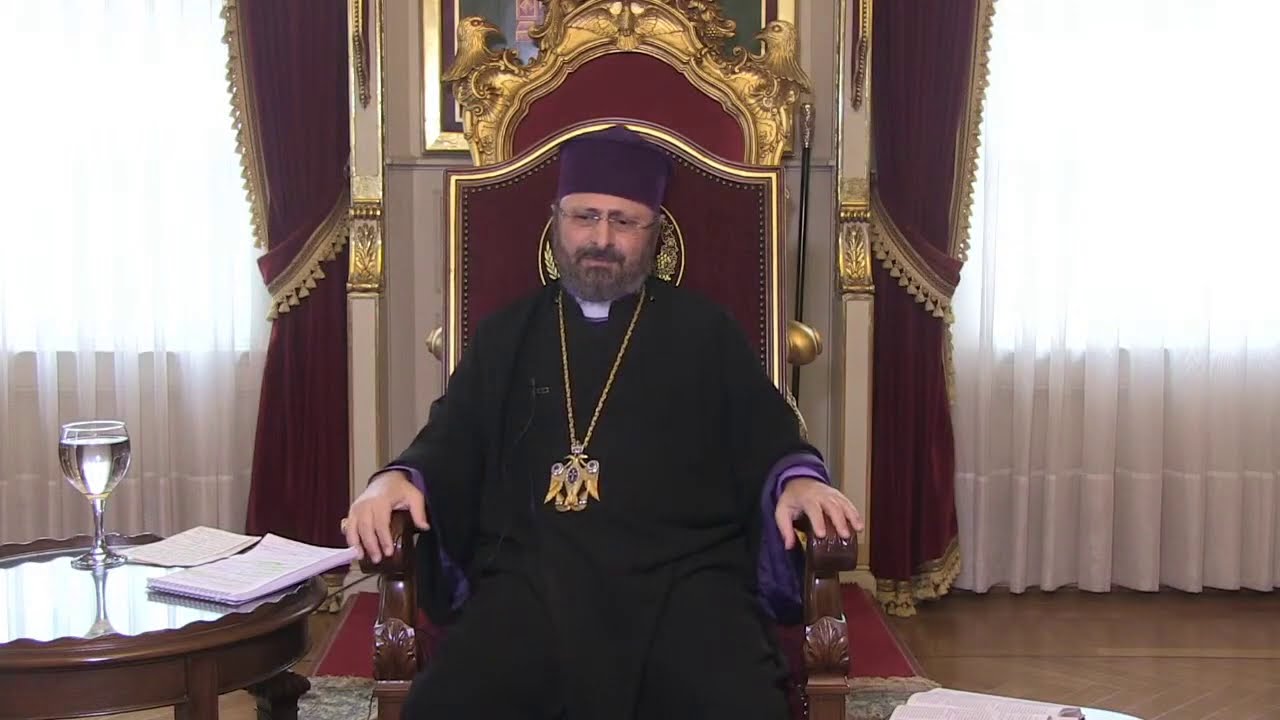 Ever since Archbishop Sahak Mashalian became the Armenian Patriarch of Turkey in 2019, he has made a series of questionable statements on the Armenian Genocide and bestowed lavish praise upon Turkish President Recep Tayyip Erdogan for his denialist remarks.

It is understandable, to a degree, why Armenians in Turkey, especially those in leadership positions, are forced to go along with the Turkish government’s denials of the Armenian Genocide, since they are hostages in Turkey. However, there are red lines that no Armenian, let alone a clergyman, should cross regardless of circumstances or locality.

However, we should not ascribe all of the Patriarch’s declarations to threats or pressures from the Turkish government. He has made many subservient statements of his own free will in order to get elected as Patriarch or endear himself to the authorities.

The Patriarch’s most recent controversial statement came in a lengthy sermon he delivered in Armenian and Turkish on April 24, the anniversary of the Armenian Genocide at Istanbul’s Kumkapu Sourp Haroutioun Church. While I welcome his desire to commemorate the Armenian Genocide, I question the accuracy of some of his statements. In my humble opinion, the Patriarch would have been better off giving a short sermon, simply expressing his sympathies to those who lost their lives in 1915. Given his mixed messages, he risked alienating both Armenians and Turks.

Let us now turn to the Patriarch’s sermon. He started by saying that April 24 commemorates Armenians who were killed during World War I. The Patriarch is thus copying the denialist words of Pres. Erdogan who misrepresents the Armenian dead as victims of war, not genocide. The Patriarch also capitalized on the fact that in 2015, Catholicos Karekin II declared all victims of the Armenian Genocide to be “saints,” which led the Patriarch to qualify April 24 as “no longer a day of mourning,” but “a day of remembrance for the consecrated saints.”

The Patriarch then came up with the following strange explanation: “The immortality of the victims of the Meds Yeghern began on the day of their death. We simply awoke to this truth after a hundred years of mourning!” He accused all those who continue to commemorate the Armenian Genocide of wanting “to sink in and remain forever in the inescapable nightmare of labyrinths of the Yeghern.”

While the Patriarch falsely represented the genocide as resulting from war, he also made some accurate assessments regarding the consequences of “Meds Yeghern” on the Armenian people, particularly the loss of their homes and lands:

“Today is April 24. It is the infamous day of remembrance of the terrible tragedy of our nation a century ago; a miserable date that symbolizes the start of one of the darkest chapters of our history…. which is familiar to us as ‘Meds Yeghern.’ …A nation was torn from its centuries-old settlements as a result of a policy cultivated and developed for reasons incomprehensible to us. The word deportation is embossed on our Armenian identity in its most painful shades. This unfortunate practice has led to the emptying of monasteries, the desolation of places of worship, the deprivation of schools of teachers and students, and in general, the settlements from their inhabitants. Families were left to mourn the loss of their parents and children. Men and women, old men and boys, young men and virgins were forced to follow a deadly path. In other words, a negative situation as a result of which hundreds of thousands of people were forced to bear in their wounded hearts the pain of irreversible and irreparable losses.”

The Patriarch continued his mixed messages by condemning the denial of the genocide, while criticizing its recognition by foreign parliaments, describing their actions as “provocations by distant countries.” On the positive side, he dared to use the term genocide once in Armenian and Turkish in his sermon: “It should be noted that the denial of the pain experienced by the Armenians on these lands wounds the conscience. We should also mention that we find contrary to moral principles the efforts that tend to use the pains of our fathers on the international stage as politicized theses against Turkey. Neither the denial nor the genocide resolutions adopted by the parliaments of various countries will bring honor to the pains suffered or to the people who lived through them on these lands. On the contrary, angry and defensive sides, by augmenting the shadows of the past, cause the peoples’ hopes to reconcile and develop natural relations to be dimmed and to block the present and future of the neighboring peoples.”

The Patriarch then suffered from a massive spell of amnesia by falsely describing “the events of the past 107 years… as a painful exception to the millennial common history” of Armenians and Turks. The Patriarch conveniently forgot the centuries of oppression suffered by Armenians in the Ottoman Empire, the Hamidian massacres of the 1890’s that caused the deaths of 300,000 Armenians, and the Adana massacre of 1909 that resulted in the killing of 30,000 Armenians.

The Patriarch, however, did not forget to praise Pres. Erdogan as the “unique figure” who issued sympathetic statements on April 24. The fact is that Erdogan’s statements should be condemned, not praised, for distorting the truth about the Armenian Genocide.

The Patriarch ended his sermon by supporting the ongoing diplomatic efforts for “rapprochement” between Armenia and Turkey. He must realize that without acknowledging the truth and establishing justice, there can be no reconciliation.