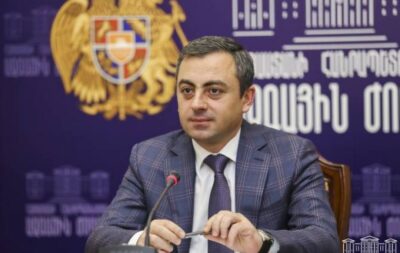 Ishkhan Saghatelyan, the Head of the Armenia-Australia Friendship Group of the Armenian Parliament, expressed gratitude to his Australian colleagues for developing the Armenian-Australian ties, noting that he is ready to make additional efforts to develop the existing relations and conveying new quality to the ties.

Saghatelyan positively assessed Australia’s balanced position on the Artsakh issue, underscoring the recognition of the independence of the Republic of Artsakh by New South Wales.

The issue of the Armenian Genocide recognition was also addressed during the meeting.

“I hope that the day of justice will come, and Australia will fully recognize the fact of the Armenian Genocide. This is needed also for preventing new genocides,” Vice Speaker Saghatelyan said, in part, and in this context touched upon the process in the direction of establishing Armenian-Turkish relations.

Ishkhan Saghatelyan underscored that Artsakh can never be part of Azerbaijan and that the conflict must be resolved within the OSCE Minsk Group.

Joel Fitzgibbon also attached importance to the recognition and condemnation of the Armenian Genocide, as well as uniting the international community’s efforts for this purpose in order to prevent new genocides in the future.

Other issues relating to the development of the Armenian-Australian ties, as well as issues of mutual-interest were discussed.